Hoofddorp, 16 February 2017 – Recruitment agency YoungCapital achieved a record turnover of 203 million euros in 2016. The Dutch market leader in the recruitment of young talent surpassed expectations with a 60 per cent increase in turnover. YoungCapital has branches in the Netherlands and Germany and is active online in eight European countries under the name StudentJob International. With a database of more than 4.5 million young professionals, YoungCapital boasts the largest online network of talent in Europe.

“We helped 29 per cent more young people into employment than last year,” says Ineke Kooistra, CEO of YoungCapital. “After years of high unemployment rates amongst this group, we are now seeing a positive trend. There is a huge increase in demand for young talent. Companies appreciate the added value digital natives provide, because they serve as a catalyst for innovation.” 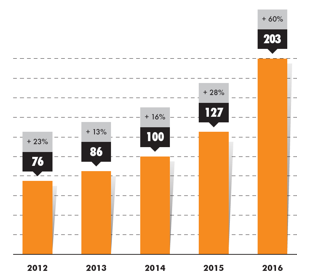 YoungCapital’s increase in turnover in millions of euros

Entrepreneurial
According to Kooistra, YoungCapital’s record turnover was only possible thanks to a robust policy on internal development, coupled with a start-up mentality. “Many companies are unwilling to invest in new people when opportunities arise but are not yet paying off. At YoungCapital, we do just that. This is, and will always be, an entrepreneurial company in heart and soul.”

International growth
YoungCapital is aiming for a turnover of 295 million euros in 2017, a 45 per cent increase compared to 2016. The increase will come from further international growth in Germany, amongst others. “We have been active online in Germany with our StudentJob International job board. As soon as the opportunity arose, we commenced staffing and sourcing. We now have offices in Cologne and Berlin,” says Kooistra. “Our StudentJob International job boards are doing well in Belgium, the United Kingdom, Spain, France, Austria and Sweden. We want to expand recruitment operations there too.”

About YoungCapital
YoungCapital believes in the power of young people. As digital natives, they serve as a catalyst for innovation. The recruitment specialist sees young professionals as the growth capital every company needs. YoungCapital brings out the best in young people and in companies, so that they keep promoting growth in one another.